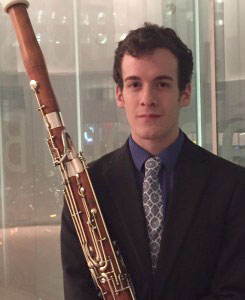 JJ Sechan currently serves as Principal Bassoonist of the Colorado Springs Philharmonic, a position he won while simultaneously finishing his Artist Diploma at Oberlin Conservatory, as a student of George Sakakeeny. In addition to performances in Colorado Springs, Mr. Sechan also performs regularly with the Boulder Philharmonic, with whom he recently toured to the Kennedy Center as part of the 2017 Shift Festival for American Orchestras.

Previously he received his Bachelor of Music degree at The Juilliard School, studying with Judith LeClair. Highlights of his time at Juilliard were his appearance during the 2015 Chamberfest series and performances of Sofia Gubaidulina’s Duo Sonata for Two Bassoons for Juilliard’s Focus Festival, a winter festival for contemporary music. Mr. Sechan has spent his past summers as a fellow at the National Repertory Orchestra, Round Top Festival Institute, Atlantic Music Festival, and Kent Blossom Music Festival.

Born and raised in Highland Park, Illinois, Mr. Sechan began his musical studies in jazz saxophone at the age of ten. He started studying bassoon at the age of 15, and has pursued this passion ever since.