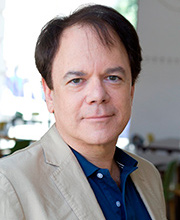 Robert Dassanowsky is Professor of German and VAPA-Film Studies, and founding Director of the Film Studies Program. He received his PhD at UCLA and attended the American Academy of Dramatic Arts and the AFI Conservatory. His research and instruction areas in film studies and media arts includes Austrian, German, and Central European cinema; British and American film; neorealism, surrealism, and neo-decadence in Italian film; cinema of the 1960s; European and American popular culture; propaganda film; women filmmakers; postmodernism. A founding vice president of the International Alexander Lernet-Holenia Society and founding director of the Colorado chapter of PEN USA, Professor Dassanowsky is an award-winning playwright, has written for television, and serves on several festival, editorial, and publication boards including the ‘Oscar qualifying’ Vienna Shorts Festival (VIS) and the Independent Film Society of Colorado (IFSOC) with its annual international Indie Spirit Film Festival. He is also active as an independent film producer (with over 25 short and feature projects), several with his company, Belvedere Film. See IMDB for details. Prof. Dassanowsky was elected to the European Academy of Sciences and Arts in 2001 and currently serves as a U.S. delegate to the organization. He was named a Fellow of the Royal Historical Society (FRHistS) London in 2007, a Fellow of the Royal Society of Arts (FRSA) in 2010, is a voting member of the European Film Academy (EFA) and has served as president of the Austrian Studies Association (ASA). From 2010-15, he was appointed external reviewer for the Transatlantic (US/EU) Masters in Cinema and Language Program of the Atlantis Project for the Improvement of Postsecondary Education (FIPSE) and the European Commission's Directorate General for Education and Culture. From 2014-19 he served on the Board of Advisors for the Salzburg Institute of Religion, Culture and Arts, and is currently Board member for the Global Center for Advanced Studies (GCAS) Research Institute in Dublin. At UCCS, he is the co-founder and faculty advisor of the long running annual UCCS Student Short Film Festival and mentors Film student recipients of the UCCS Student/Faculty Research, Creative Works and Community Service Awards, as well as MFA Graduate bound students.