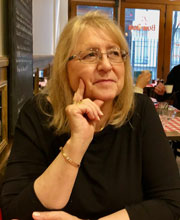 Teresa L. Meadows is chair of VAPA and an associate professor of French Culture and Visual and Performing Arts (Theatre and Film Studies) in the Departments of Languages and Cultures and Visual and Performing Arts at the University of Colorado Colorado Springs. Her research interests, publications, projects and creative works are varied, as is evident from her appointment in two departments. She has studied French language, literature and culture with an emphasis on contemporary political theatre in France, issues in race and gender, and contemporary theory in film and theatre. From her intellectual base in cultural studies, she works regularly with alternative theatre companies in France. She is an active translator of French and has translated a variety of texts, from contemporary French theatre to historical Quebecois journals into English. She studies and teaches classic, modern and contemporary French culture, European and American theatre, film and popular culture. She is currently editing a series of interviews conducted in Paris, beginning a critical history of the work of filmmaker Hélène Chatelain and working on several translations of plays and critical works.