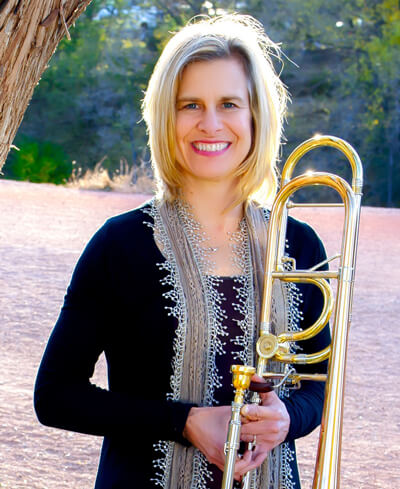 Sondra Bell received her doctorate in trombone performance and wind conducting from the University of Cincinnati College-Conservatory of Music.  She is currently on the faculty at the University of Colorado at Colorado Springs where she conducts the concert band and teaches studio trombone. Her professional experience includes performances with the Colorado Springs Philharmonic, the Colorado Symphony, Aspen Choral Society, Colorado Opera Festival, Chateaqua Music Festival, Cucharra Music Festival, and the Aspen Music Festival.  In the summer of 2010, she was a prize winner at the International Women's Brass Conference Solo Competition in Toronto, Canada and in 2011, she toured the US with the German based brass ensemble, Eurobrass.  In 2012 and 2013, Dr. Bell taught and performed at the Masterorks Festival in China.  She has served on the faculties of the University of Dayton, Adams State College, Gustavus Adolphus College, Pikes Peak Community College and UCCS.   In addition, Dr. Bell maintains an active, successful private low brass studio.  Recent students of Dr. Bell have won national awards, solo competitions, a President's Own Marine Band appointment and have received lucrative scholarships to the University of Colorado, University of Denver, University of Northern Colorado, University of North Texas, Oberlin and the Juilliard School.  Dr. Bell hosts The Colorado Trombone Festival and directs the Pikes Peak Trombone Choir.