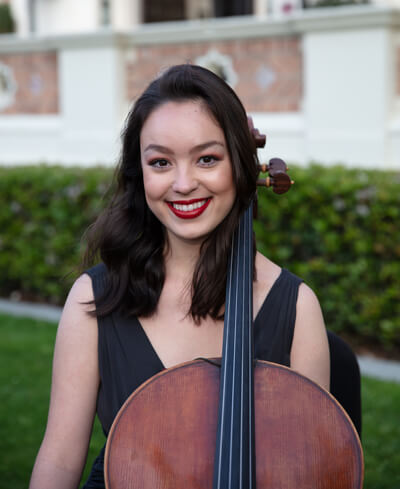 Leah Hansen began her cello studies at the age of three. She has performed in numerous solo, concerto, chamber, and orchestra concerts. In 2004, Leah was chosen to solo in the Walt Disney Concert Hall for the “John Kerry and Friends” Presidential Fundraiser with an audience of stars including Leonardo DiCaprio, Barbara Streisand, Neil Diamond, Robert DeNiro, and Ben Affleck. She also performed in the Irvine Barclay Theater for the “Stars of Tomorrow.” At eight years old, Leah was the youngest First Place winner of the L.A. Cello Society Scholarship Competition.

In 2007, Leah was invited to solo with the Pacific Symphony under the direction of Maestro Carl St. Claire on a four-city tour. Since 2008, she has soloed with the Culver City, Bellflower, Brentwood, Inland Valley, West Covina, Mount St. Mary’s, and South Coast Symphonies. Other awards include; Scholarships from the YMF, Fe Bland Foundation, and the Colburn School. Additional Prizes include: Discovery Prize in the National Debut Competition sponsored by the YMF in 2011, First Place in the ASTA State Finals in 2012, and First Place in the Mondavi Young Artist Competition in 2012.

Leah was invited to solo with the YMF Debut Symphony Orchestra in April 2013 performing the Dvorak Cello Concerto.

Leah Hansen was a scholarship recipient in the prestigious Academy program at the Colburn School of Music, under the tutelage of Ronald Leonard. She has coached with Alan Stepansky, Janos Starker, Richard Aaron, Amit Peled, Steve Doane, Timothy Eddy, Natasha Brofsky, and David Finckel.

Leah Hansen was chosen to perform in the convocation for the USC fall and spring admits in 2013 and 2014. Leah performed with Elton John and Kristen Chenoweth in 2014. Leah’s most recent masterclass performances were given by Steven Isserlis and Raphael Wallfisch.

Leah Hansen’s quartet, Quadraphonic, toured the city of Missillac in France during the summer of 2018 and performed in various venues throughout the city.

Leah finished her Bachelors of Music and Masters of Music degree in Cello Performance at the USC Thornton School of Music with Professor Andrew Shulman and is currently the principal cellist in the Colorado Springs Philharmonic.