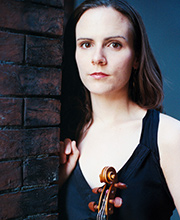 Violinist Martha Muehleisen has performed throughout the US and Europe as an orchestral, chamber, and solo musician. Martha is an advocate for new music, performing with groups such at the Great Noise Ensemble in Washington, DC and the Mobtown Modern series in Baltimore, Maryland. She was selected as a participant in the Lucerne Festival Academy in Lucerne, Switzerland where she was able to work with Pierre Boulez and members of the Ensemble Intercontemporain. Martha is a founding member of the Matrix Project, a string quartet based in Colorado Springs. She is also a founding member of the Penbridge Trio, which presented a concert series of all new music in the United Kingdom in the summer of 2010. In 2009, Martha participated in the soundSCAPE music festival in Pavia, Italy, where she premiered several pieces by young composers. She has been fortunate to work with conductors such as Marin Alsop, Pierre Boulez, Peter Eötvös, David Robertson, and James DePriest. She completed her Masters Degree at the Peabody Institute of the Johns Hopkins University in 2007, studying primarily with Herbert Greenberg, and has also completed a Certificate of Contemporary Music Performance at the University of Maryland, Baltimore County, studying with Airi Yoshioka. Martha currently serves as violin/viola faculty at University of Colorado, Colorado Springs.