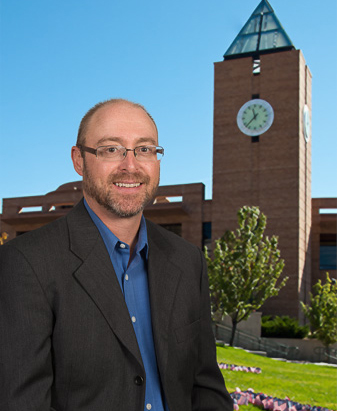 His work is critically acclaimed; His most recent recording, the Living Daylights (2018) on pfMENTUM received rave reviews and remained on the top 10 of radio playlists across the U.S. for over a year. Psychoangelo’s release panauromni was listed on the top ten cd’s of the year by Chicago Time Out.  He recorded two cd’s with O’Keefe / Stanyek / Walton / Whitehead –“Tunnel” and “Unbalancing Acts” on Circumvention and 9Winds Records, performed solo trumpet on “Tania”- an opera by Anthony Davis on Kotch Int., and was principal trumpet on the soundtrack to the ground-breaking video game Everquest.

Other collaborations include the film score for the documentary film Stitching Rites, UCCS Theatreworks (Heisenberg), the Ormao Dance Company in an installation Sanctuary of Moments at the Colorado Springs Fine Arts Center (2014), Resistance and Rebellion (2014) with folk artist Tim Eriksen (winner of a Peak Arts award), and Boundless Breath (2013). He was Artist in Residence at the 2014 Sonic Landscapes Festival at CSU Fullerton with Matthew Burtner working with composer Eve Baglarian, the Guidian Hand Trombone Quartet, and collaborated with Pandit Sanjoy Bandopadhyay of Kolkata, India (2013).

Past appearances include REDCAT in Los Angeles, the CSUF New Music Festival, BONK Festival, European performances at Bimhuis and Zaal 100 in Amsterdam, Holland, was a headliner with Psychoangelo at the Innova Festival in NYC at the Stone, the EcoSono Institute in Alaska, the SOUNDscape Ensemble, the IMPS Festival in Seattle, the ISIM Cross Cultural Improvisation Festival at Roulette and a featured artist at Columbia University with Yarn / Wire. He has performed with such artists as Grammy Award winner Cuong Vu, Pauline Oliveros, Scott Amendola, Kent Maclagan, George Lewis, Keith Rowe, Nels Cline, Vinny Golia, Wadada Leo Smith, Mary Oliver, Nicolas Collins, Ofer Ben-Amots and Anthony Davis.

Previously, Whitehead held the Principal Trumpet position in the Orquesta Sinfónica UANL de Monterrey, Mexico and the La Jolla Symphony Orchestra. He played in big bands led by George Russell and Gunther Schuller and was a spanned musical chasms by immersing himself in the experimental rock scene in the Boston area for several years in the late 80’s and early 90’s as bassist and lead singer of 518.

As an educator, he won the Innovations in Teaching with Technology award at UCCS and the Big Idea Award (with the Ormao Dance Co) from the Pikes Peak Arts Council. He is the Artistic Director of the Peak FreQuency Creative Arts, Director of Performance of the EcoSono institute (with Dr. Matthew Burtner) and was Principal Trumpet in the Chamber Orchestra of the Springs (2010 – 2020).

In 2006, He founded the interdisciplinary Music Program at the University of Colorado, Colorado Springs where he is currently a Professor of Music,  is currently the Co-Director of the Bachelor of Innovation™ degree and created the Creative Music Performance & Technology, Composition & Sound Design Bachelor’s degree tracks. Glen is a Bach trumpet artist for Selmer / Conn and received his Bmus in Performance at the New England Conservatory of Music, and M.A. and D.M.A from the University of California, San Diego. His teachers include Timothy Morrison, George Lewis, Edwin Harkins and Anthony Davis.